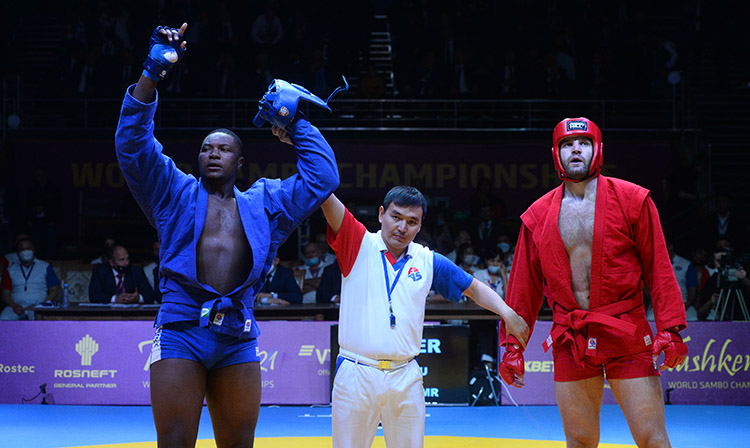 Cameroon athlete Maxwell DJANTOU NANA won a gold medal in the over 98 kg weight category in combat SAMBO, defeating the celebrated Russian sambist, repeated world Champion in combat SAMBO Denis Goltsov in the finals. He shared his impressions of the tournament and the enjoyment of the long-awaited win at the central tournament of the year in the International SAMBO Federation calendar with the FIAS website.

Congratulations on winning! It was no secret that the experts regarded your Russian opponent as the favorite. How did you manage to succeed?

– As I have stated many times, it is all God's will, and I was able to win thanks to God. This year in Egypt, at the African SAMBO Championships, I promised to come to Tashkent and win the gold. Today I did it, I kept my promise. My faith in God always supports me, we have an old adage in Cameroon saying "Entrainement - difficile, victoire - facile", which can be translated as "Training is hard, victory is easy". So I trained hard, was fighting tooth and nail, and finally achieved the long-awaited win that came as the result of my efforts. 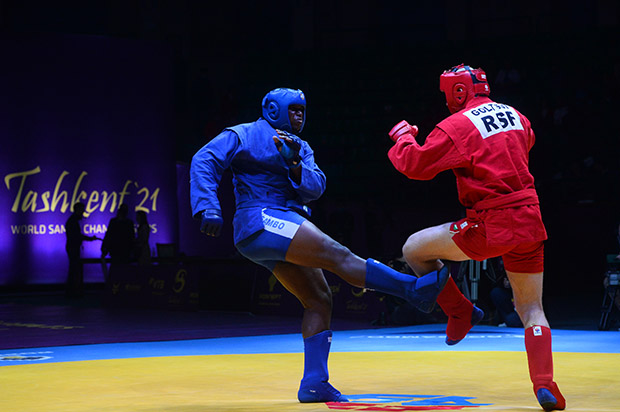 What exactly did these efforts include? By all accounts, you have noticeably improved your technical skills in the past year.

– First and foremost, I wish to thank all the coaches of the national team and all members of our federation: each of them made a tremendous contribution to our progress, to our training, to our technical and professional growth, and in hard times they were always around and of great help. Without their support, we would be unable to accomplish this result.

Well, as for the training process itself, you probably should not feel sorry for yourself much. Every time it is getting tough, I realize that I need to overcome myself, challenge myself and cope with the difficulty.

In 2019, you won the silver, last year, the bronze, and this time, the gold. Your today’s win can be called anything but ordinary. How do you feel now, having defeated such a formidable and reputable opponent?

– Without doubt, it was an extraordinary win, and it was anything but easy for me. By imagining the opponents against whom I am matched, I boost my motivation. If, for instance, as I train in the gym, I do 10 push-ups, and I imagine that my opponents are doing 20, and the next instant I think why I can’t do more, and I do 20 as well. They are mighty strong, they are the top, the elite of the world SAMBO and MMA. At this point I ask myself why I can't be like them. I try to keep moving ahead all the time: if they take one step, I try and take two. It helps me, it makes me stronger.

Now a few words about the bout itself, please. You had to defeat a combat sambist who has no weak points either in the stance or in the fighting. What was your tactic for the match?

– I realized whom I was matched against, I knew that Denis was professionally engaged in MMA, I knew how strong he was, and how dangerous he was, so I decided to work as number two from the very start. The chief task was to be ready for his blows lest I should be knocked out. As much as possible, I was trying to escape his strikes, effective hits, to wait for an opportune moment to conduct my technique. 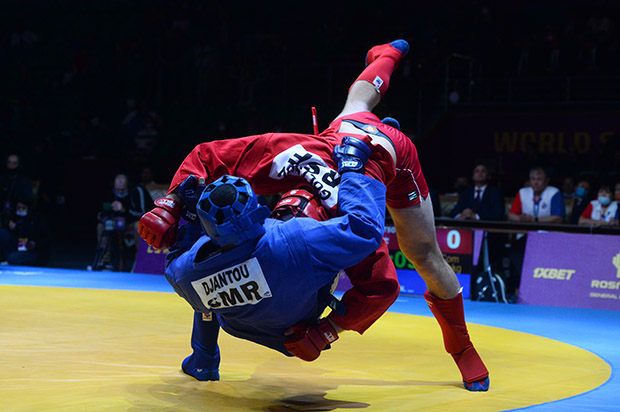 On the outside, it appeared that Denis reached his goal a number of times, inflicting sensitive blows. Was it so? And if it was, what tactics did you choose in order to retain the advantage, as it appeared that in terms of physical condition Denis was superior to you...

– I didn’t aim to keep our score balanced, rather, my goal was to improve mine. Denis Goltsov is a very strong opponent, and he did not let me do it. Myself, I was unwilling to take an unjustified risk, as I realized that I could’ve missed his counterattack.

For the past two years, the Cameroon national team was winning gold medals at the World Championships. From your point of view, can this be called a trend, and would it persist in the future?

– Indeed, this is no longer an accident but an established trend. Our medals result from long, persistent and painstaking efforts, they crown our labors. Therefore, next year be sure to expect our team grabbing not one but a few gold medals. 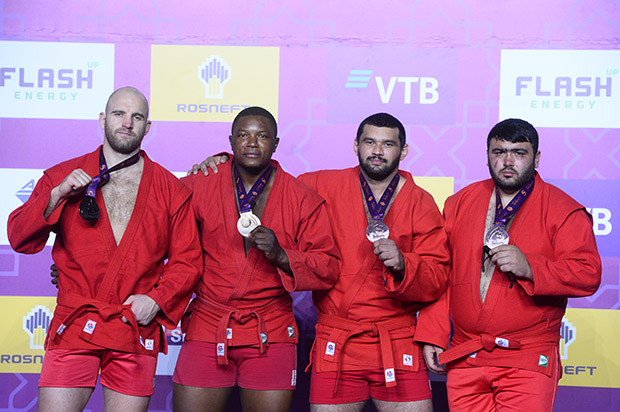 In this respect, can the fans hope that the Cameroon national team will hit the medal stand in the team standings as early as next year?

– So it will be. Next year, our team is going to score more medals, and nothing will keep us from reaching the medal stand.