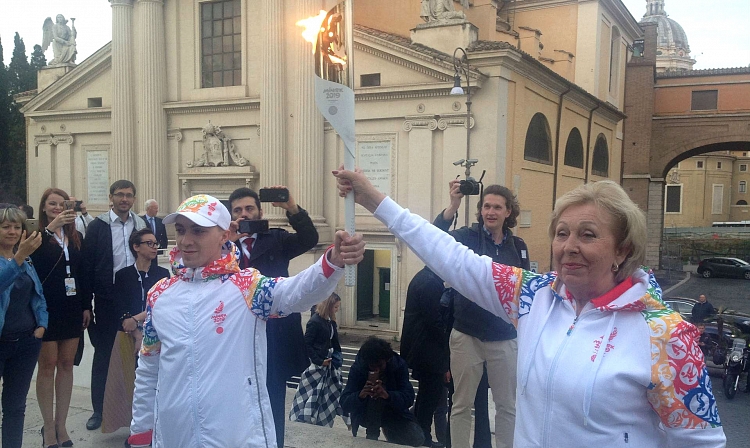 'Today we are starting a long journey, the 2019 European Games will be the largest multi-sport event on our continent. We expect incredible sporting events. Belarus is a great country known for its rich culture, hospitable and pleasant people, and we are confident that everything will go off very well,' stated Kocijančič.

'This day is very important for us, because we understand that, in fact, the Games are beginning now. I hope that the Games will become the brightest sporting event of 2019,' noted Katulin.

As part of the lighting ceremony, a symbol of the event, an olive tree, made especially for EOC, was presented. As its creators explained, it extends its roots into the depths of time and raises branches to shelter and protect athletes of 50 European nations. The olive tree had been considered sacred by the ancient Romans, and its sculpture, made by the famous sculptor and jeweler Nicola Amato, was designed as a sign of respect for the values of peace and friendship.

Before heading to Minsk, members of the Belarusian Mountaineering Federation will carry the flame of the II European Games to the peak of Mont Blanc. Then the route of the torch relay will go through Austria, the Czech Republic, Hungary, Poland, Slovakia, and Slovenia.

The flame will finish its journey on June 21 at the Dynamo Stadium in Minsk, where the Cup of the European Games will be lit. It is expected that 450 torchbearers, 100 volunteers and 10 fire keepers will be involved in the relay.

SAMBO tournament in the program of the II European Games in Minsk will be held on June 22-23. Athletes will compete for 18 sets of medals in sport SAMBO, 9 for women and 9 for men. In total, the Games will be attended by athletes from 50 countries competing for 199 sets of medals in 15 sports.