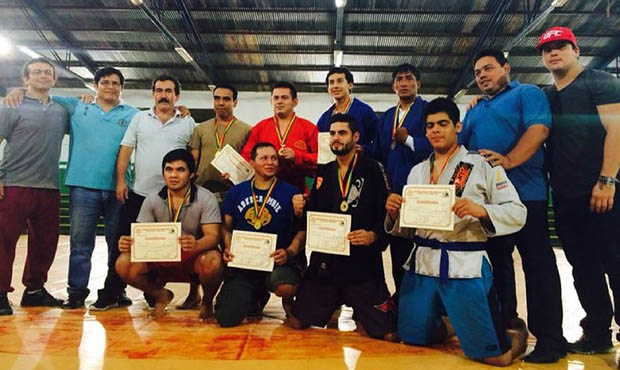 The first ever Bolivian Open Sports and Combat SAMBO Championship was held in the city of Santa Cruz from 8 to 9 of February. SAMBO athletes in three weight categories in Combat SAMBO and in five – in Sports SAMBO gathered at the Santa Rosita Sports Complex to demonstrate their own skills and identify the strongest ones. It’s interesting that Santa Cruz can be called SAMBO capital of Bolivia, because in this city the largest number of clubs of the country, developing SAMBO, are concentrated. Now Santa Cruz became history also as the place where he first Open Championship in this sport was held.

The Bolivians’ successes in the international arena bear evidence of the fact that competition at the tournament was serious. Last year SAMBO athletes from this country participated in the Pan-American SAMBO Championship in Panama and brought home two bronze medals. In order to consolidate and build on the progress, the local SAMBO association headed by Samuel Vivankos conducts training seminars in various cities of Bolivia. Today in the country SAMBO clubs in Santa Cruz, La Paz and Cochabamba are active. Probably, the first Bolivian Open Sports and Combat SAMBO Championship conduct gives impetus to further development of our beloved combat sport in this country.