Press conference on the eve of the Asian SAMBO Championship start 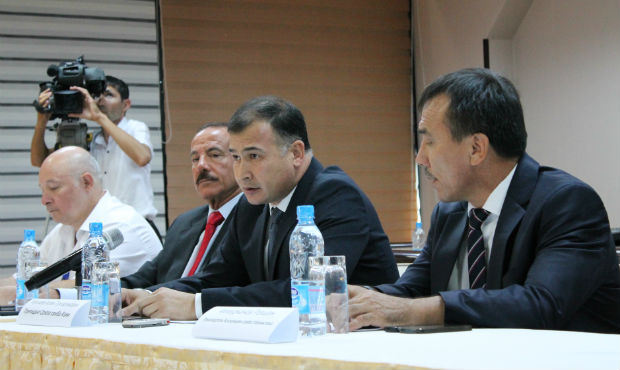 On the tournament starting tomorrow

Alam Mullaev, the President of the Asian SAMBO Union, opened the press conference dedicated to the Asian SAMBO Championship starting tomorrow, which is held under the patronage of the Asian SAMBO Union and International SAMBO Federation. The continental tournament will bring together over 350 SAMBO athletes – seniors and juniors – from 17 countries. A large number of journalists also confirmed their participation in the tournament, many of whom were present in quite impressive numbers at the press conference already today.

On why SAMBO is in the Uzbeks’ blood, and how it develops in the host country of the Championship

At the press conference Ravshan Akhmedzhanov, Chairman of the Uzbek SAMBO Association, pointed out that SAMBO is recognised as a priority sport in the country by the Uzbek Government Decree. The country’s government lent tremendous support, in particular, to the organisation and conduct of the continental SAMBO tournament this year. “In Uzbekistan SAMBO is a very popular sport. Why? I will say this: “SAMBO is in our blood!”. And it’s not honourable words, the thing is that SAMBO has much in common with our national fighting kurash. This is our strength and advantage, – pointed out Ravshan Akhmedzhanov.

“Strong and experienced SAMBO athletes, who pull young ones and share the experience with them generously, constitute a very good “backbone”. Now there is a gradual alternation of generations, but, fortunately, we are able to do it very organically, – continued Akhmedzhanov. – One coach cannot do anything, only in cooperation with strong athletes, with team leaders who help the mentor from a pedagogical point of view. Only in such a way we can make our team strong and united. The offspring of this work, I hope, will be seen not only here but also at the World SAMBO Championship, which will be held in Narita (Japan) in November”. 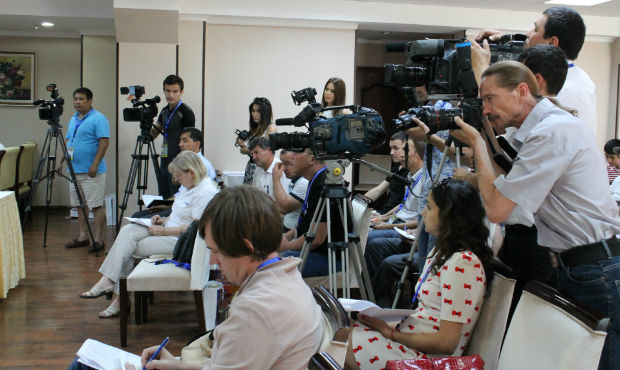 Ravshan Akhmedzhanov cited statistics of 2013, according to which there are about 10,000 SAMBO athletes in Uzbekistan now, with whom about 800 coaches work.

“For the preceding year we achieved significant results, the Uzbek SAMBO athletes won over 100 different medals at the international competitions in 2013. We brought five medals from the Youth World Championship, and added 2 silver and bronze awards to our medal collection at the World Championship in St. Petersburg. Of course, local Championship imposes an additional responsibility on our SAMBO athletes, but I’m sure of their honourable performance, – said Chairman of the Uzbek SAMBO Association.

On success of the modern Asian SAMBO

Alam Mullaev, the President of the Asian SAMBO Union told the media representatives on how SAMBO is developing in Asia now. He noted that in the year of organisation on the scene SAMBO made a great leap in development on the continent.

“Among the most important things it stands to mention recognition of our combat sport by the Olympic Council of Asia, and SAMBO joining the Asian Games program. Among the next is the start of SAMBO tournament in the program of the Asian Beach Games in Phuket (Thailand) in November this year. After the Congress in St. Petersburg, when the Asian SAMBO Union was established, less than a year passed, but our work is already bearing fruit, – Mullaev noted. –Further geographical expansion of the Asian SAMBO, its popularisation on the continent is the most important task for us now. I am convinced that the tournament starting tomorrow, will serve just these purposes and will be an additional impetus which will give inspiration and strength to our work”.