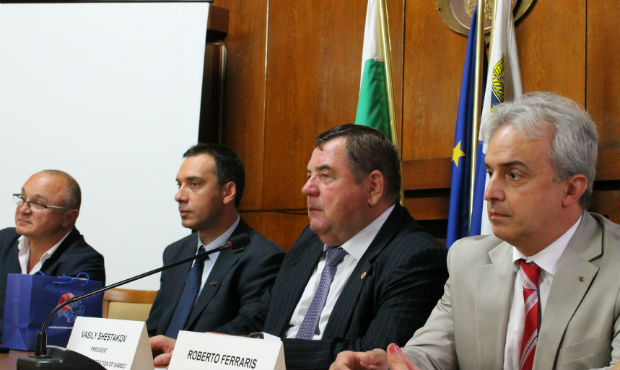 The official part of Sambo World Cup in Bulgaria started on September 5 at 4.00 pm with press conference at Burgas City Hall. This event was attended by Mayor of Burgas Dimitar Nikolov, FIAS President Vasily Shestakov, FIAS General Secretary Roberto Ferraris and President of the Sambo Federation of Bulgaria Rumen Stoylov.

Participants of the press conference noted that Burgas is absolutely ready for this year’s fourth final World Cup to summarize the overall Sambo World Cup 2014 and determine champions and winners of the sambo cup scoring.

“The contest will take place on September 6–7 at Mladost Sports Hall on three carpets among sports sambo athletes, male and female, and combat sambo athletes. Bulgarians will be represented at the domestic World Cup by their strongest team. Four world champions participate in our team: Kalina Stefanova, Maria Oryashkova, Rosen Dimitrov and Marko Kosev,” President of the Sambo Federation of Bulgaria Rumen Stoylov reveals the details of the forthcoming tournament.

Dimitar Nikolov also commented the upcoming Sambo World Cup, “Bulgaria is rich in sportsmen. Several famous sportsmen were born in Burgas; world boxing champion and Olympic champion are among them. People here love sports, and sambo is very popular both in Bulgaria and in our city. I hope this contest will be fun and spectacular, and many spectators will come to support sambo athletes and watch beautiful fight.”

Vasily Shestakov thanked Mayor of Burgas for its contribution to the development of the world sambo on behalf of FIAS and presented a silver coin issued to commemorate the 75th sambo jubilee celebrated by all sambo athletes last year. FIAS President also noted, “We are waiting impatiently for the Bulgarian stage of Sambo World Cup which starts tomorrow in Burgas. Bulgaria is a country where sambo is loved. I have no doubts that this sambo tournament will be well organized. I am sure that Bulgaria will soon host other large competitions like Junior and Adult World Championships. Now FIAS makes all efforts to carry out competitions on every continent. I am glad that sambo is taken very seriously in Bulgaria, and, therefore, audience definitely is waiting for this contest to start.”