Nice to meet you! Maria Guedez 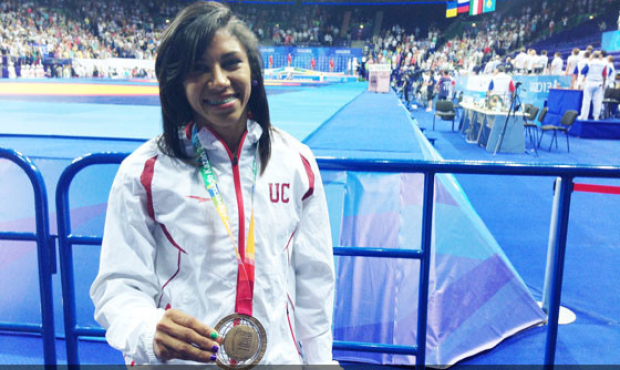 1. What brought you to SAMBO? Why did you begin to go in for this combat sport?

I began to go in for SAMBO because I like combat sports, earlier I went in for judo.

I like SAMBO – it is a sport where you need speed and efficiency. SAMBO has opened the doors of my competitive career. It’s because of it I’m so far gone, and has achieved a lot. I hasn’t had such opportunity in other disciplines.

3. Are there many athletes involved in SAMBO in your country?

Yes, now in Venezuela they know more about SAMBO thanks to our outstanding athletes. Our level has risen enough and, in fact, thanks to our SAMBO athletes, we are reputable SAMBO country here in America.

4. Do people in your country, far from the sport, know about SAMBO? Is it covered in the media?

Every day more and more Venezuelans learn what SAMBO is. However, some still confound it with a dance. However, thanks to SAMBO athletes’ victories in mixed martial arts fights, many are well aware of SAMBO now. As for the media, they write and talk about SAMBO not so much as one would like. Although key events are always covered in the Internet and newspapers.

5. What your achievement do you consider the most important as of today? What tournament was the most memorable?

6. What is your most painful failure – the one you regret?

My first and most painful failure in SAMBO was when having gone into the adult category I took only the 7th place at my first World Championship (it was the World Cup in Tashkent, Uzbekistan). I didn’t win a medal and from that moment began to train even harder to give my country a medal next year.

7. Who is your most important fan?

My family are my most important fans.

8. Where do you train? What conditions for training sessions do you have?

I train in the city of Valencia, Carabobo, in the La Cocuicita Club. Our Club has brought the highest number of international SAMBO awards to Venezuela: a total of 14 medals at the international competitions. Our training conditions are not the most suitable yet, but we cope. I would like to take this opportunity to thank Mr. Shestakov,the FIAS President, separately for helping our club with SAMBO uniform, as it’s impossible to find a uniform for practicing SAMBO in Venezuela.

9. Did you have to use SAMBO techniques in everyday life? How do you solve conflicts?

I didn’t need to use SAMBO in everyday life. I solve my conflicts by means of words, to avoid problems.

10. How would you tell about SAMBO to a person who has never heard about it?

I always say that it is an applied contact sport where different techniques are used to attack your opponent. You can also win a fight quickly with painful holds, points difference and “victory by fall”.

My major sports desire is to become the world champion, to experience this feeling on a podium again and stay there, God willing.

12. What do you do besides SAMBO? In real life?

I am a student, I spend time with my loved ones, but most of the time I train. My coach Yeimer Lopez is a man who not only trains me, but also helps me day by day.

13. Do you have any hobbies? What do you do in your spare time?

In my spare time I go to the cinema and visit my family, because I don’t live with them. All the year round I concentrate on visiting my training sessions, I live in the Olympic Village of my state. My hobby is running. When marathons are organized, I take part in 10 km hurdles.