SAMBO in Baku: in the heart of sports journalism in 2014 and the capital of the 2015 European Olympic Games 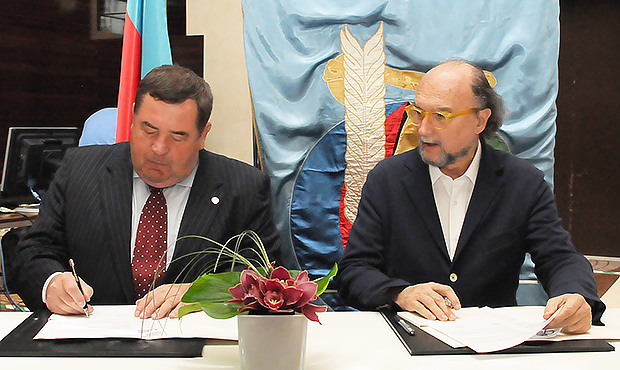 The annual Congress of the International Sports Press Association (AIPS) is being held this year in Baku – the capital of the first ever European Olympic Games, which the main city of Azerbaijan will host in 2015. Even as we speak sports facilities being constructed in Baku amaze imagination – both ultra-modern and light, and the cleanliness of streets and architecture, organically combining the national colors with the wonders of progress, appeal to the eye. But it is 2014 outdoors yet, and in this report we will tell you what Baku best remembered by all participants and guests of the AIPS Congress for, who seemed to examine city shortly before the upcoming Games.

Thomas Bach, Head of the International Olympic Committee, opened the annual, 77th in a row, Congress of the sports journalism elite. Opened virtually as Head of the Olympic movement welcomed all members of the Congress, this time over 200 of them brought together, in his video message, where in particular noted: “The AIPS plays an important role in shaping the perception of the Olympic Games and is an important partner of the IOC”. Having wished a constructive Congress to the Congress delegates, Head of the IOC invited journalists to contribute to the discussion of a “roadmap” of the future Olympic Movement. 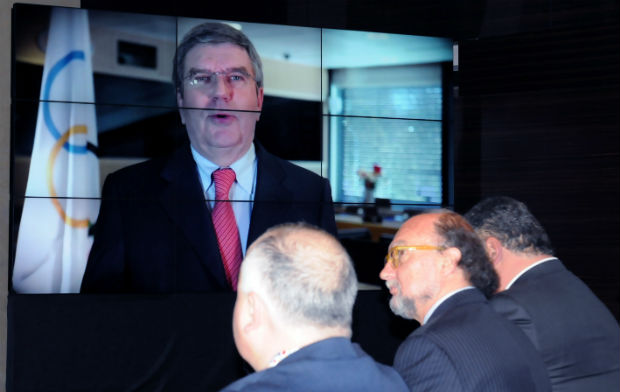 About the First Lady of Azerbaijan

On the eve of the opening day of the Congress, all delegates and guests of the “sports wordsmith” meeting took part in the gala dinner, hosted by the President of the the Republic of Azerbaijan Ilham Aliyev. Having welcomed all the gathered in perfect English (as it turned out, in due course time the President graduated from the Moscow State Institute of International Relations and is fluent in three languages), Head of the state noted the importance of the event: “I am very pleased and honored that our country hosts such a number of journalists these days. I’d like you to have the opportunity to learn more about our capital – Baku, our culture and history, during the Congress”.

All journalists were fascinated by warmth, intelligence and openness of the Azerbaijani leader. But, as a lot of journalists (mostly men) noted in conversations later on, they awaited the appearance of Mehriban Aliyeva at the night – the First Lady of Azerbaijan. The President’s wife is loved by people for her contribution to social, cultural and charitable activities of the republic, but most importantly – in the country everybody and his brother admires her beauty, which journalists susceptible to aesthetics would have contemplated. 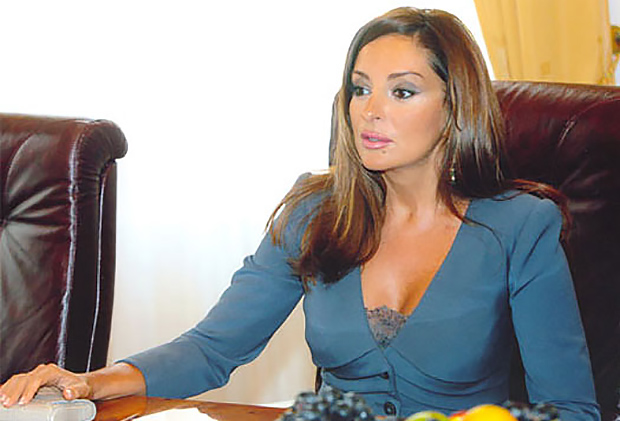 There were several major challenges for the FIAS delegation headed by the President Vasily Shestakov, and Vice-President Andrey Klyamko, in Baku: to make a presentation, sign a cooperation agreement, and hold a number of meetings. The “takeaway” of the FIAS visit in Baku – the agreement between Head of the AIPS Gianni Merlo and Vasily Shestakov was formally signed, but, interestingly, on the eve of one point of the cooperation agreement had already been fulfilled: at the Executive Committee of the AIPS SAMBO Committee of the International Sports Press Association was established, the main task of which is to be the FIAS advisor, assistant and consultant in promoting peace in the sports press.

Nikolay Dolgopolov – Vice-President of the AIPS and experienced journalist, under whose guidance famous “sports pens” from Belarus, Bulgaria, Iran, Mongolia and Turkey will now work on the journalistic SAMBO field – has headed the Committee. Their task is to make SAMBO even more recognisable in the modern world, where there is often believed that if the event is not covered by pen, television or photo journalist camera, then this event seems not to take place, by means of tips, articles, information.

The usual form of the Congress work suggests planned sessions and meetings, the General Assembly and a lot of discussions and panels, as well as presentations of the AIPS partners. This year there also were the FIFA with a story about the services for the press at the Brazilian World Football Cup, and Kazan with the World Swimming Championship starting there, as well as the IOC, athletics, FISU and many other sports federations and organisations among the presentations there.

SAMBO has gone the way of creativity, while, of course, having left the space for the semi-official newspaper “reading required” at such activities. SAMBO picture for journalists turned out to be the following: welcome and thanks of the FIAS President Vasily Shestakov, who, in particular, said: “The International SAMBO Federation is full of energy and strength to carry the Olympic dream of SAMBO fans in the world now. I sincerely thank the President of the AIPS Gianni Merlo and you – the best representatives of the world of sports journalism – for all that you do to promote the sport in society. The AIPS, and therefore all of you, is a reliable, professional and smart partner for the International SAMBO Federation”.

Then there was Nikolay Dolgopolov and your humble servant’s presentation in what way SAMBO is moving in the modern world there. And then the time was right for the thing, that many of the Congress delegates, accustomed to the speeches and slides, reports and statistics at such events, remembered for several days, lively debated and no less keenly interested in then. The fact is that the FIAS presentation group – Alexander Perepelyuk and Pavel Kuzyukov who showed all the beauty of SAMBO, made representation to the Congress delegates, and then showed a playful scene, in which the bride famously dispatch her former admirer, dissatisfied with her “choice”. The audience laughed and exclaimed with delight, photographers caught interesting shots, and TV people shouted – “Well, finally drive”. The result – for two days journalists who wanted to know more about SAMBO, its possibilities and prospects, didn’t leave the FIAS President. 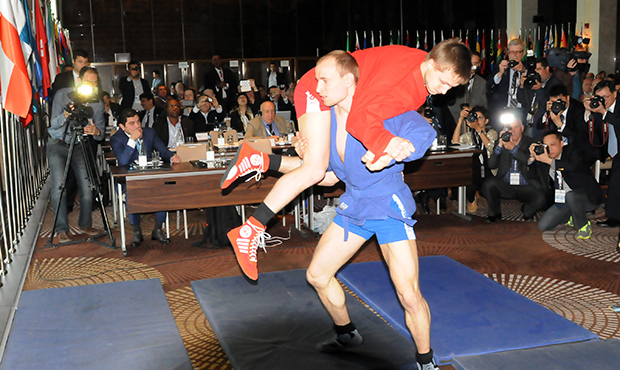 Even as we speak we can say about one SAMBO prospect, which will probably become a reality after this Congress – they will begin to speak and write about SAMBO in the world of sports journalism more now.