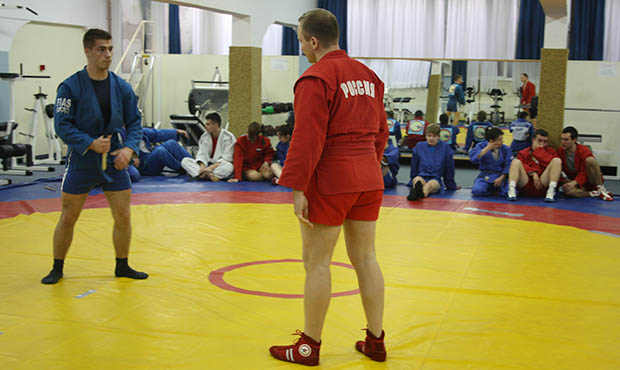 There is a new tradition in Slovenian Sambo Federation. Every year a FIAS specialist comes to the country before the start of the national championship. The representative not only helps local athletes and coaches prepare for the tournament, but also conducts training seminars for the members of the Federation. In addition, the FIAS specialist takes part in organising demonstrations for schoolchildren and students.

Last year, it was Sergey Gromov, the six-time world champion among masters. He conducted teaching and coaching sessions with sambo athletes from the national team of Slovenia, as well as sambo trainings with students during physical education and self-defense classes. In the training center, particular attention was paid to trainings with future professionals who protect important public facilities, cash messengers and bodyguards.

This year, he was replaced by FIAS specialist Vyacheslav Goncharov. In Ljubljana, he began with training seminars for Prometna Škola students, where special stress was laid on methods of escort for law enforcement agencies, as well as self-defense techniques against punches. After that, Vyacheslav initiated trainings with the national team, during which special emphasis was laid on practicing of painful leg locks.

Further trainings were aimed at practicing both effective and spectacular techniques. During self-defense training seminars Prometna škola students prepared for exhibition performances under the strict guidance of Vyacheslav Goncharov. Owing to the very good preparation of sambo athletes, they were able to organise a spectacular show for parents and entrants of Prometna škola faculties of public facilities protection, encashment, law enforcement agencies and logistics.

After that, the national sambo championship took place. FIAS expert Vyacheslav Goncharov acted as the principal judge of the competition. Following the tournament, he shared his own impressions:

- It should be noted that the organising committee of the championship, and its Head, President of the Slovenian Sambo Federation Dmitry Stoyanov, held this tournament at a high level. About 35 sambo athletes took part in the competition. The meetings were held at a high level that ended with painful arm and leg locks of different techniques. In addition, the athletes have demonstrated a great number of techniques in the standing position.

Good tradition of FIAS experts to support Slovenian sambo athletes will certainly be continued in the future. This means that the arsenal of techniques of local athletes will continue to grow. Over time, they will make themselves known at the highest international level.