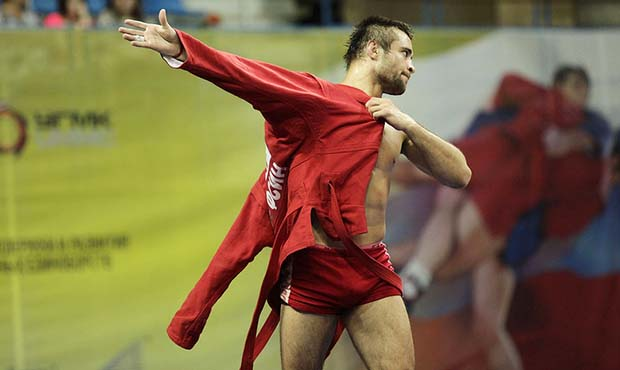 Have you ever wondered who and how sews uniform for SAMBO athletes? Jacket, shorts, racerbacks – everything what SAMBO athletes wear while performing or training shall meet a set of requirements and withstand severe loads. FIAS website has already informed you about the trip of Dmitry Maximov, Sports Director of the International SAMBO Federation, to the factory sewing sportswear in Tajikistan. Our today’s photo report shows on what they managed to see and learn there. 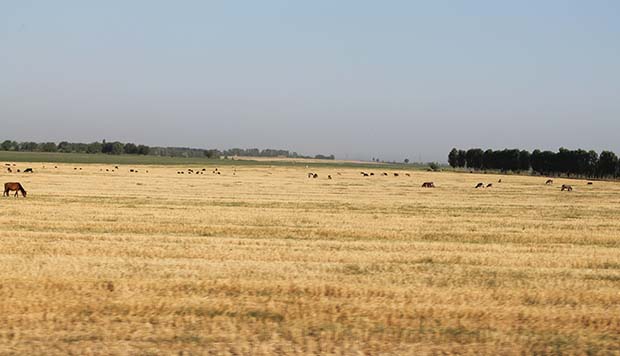 The way to the Tajik Khujand with the capital of Uzbekistan – Tashkent began for us, where on that days the Asian SAMBO Championship started. The sceneries along the road are very similar in both countries, although they have their own distinctive features. The main thing that unites them – both in Uzbekistan and Tajikistan there is necessarily something cultivated and something grazes in the field. They don’t stay at a loose end. 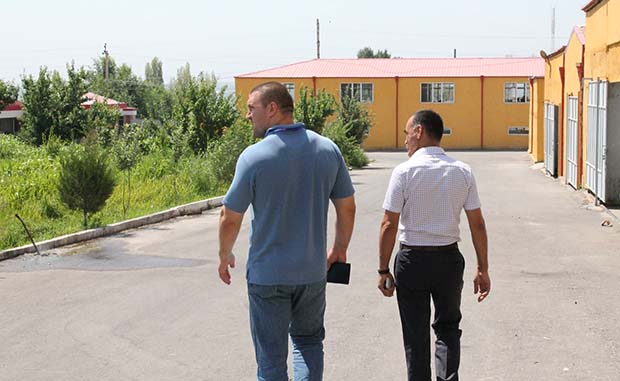 Reaching the territory of the factory, which bears the name of its Director – Rakhimov A.A. LLC (TM «ESKHATA»), we go on a tour of the company, simultaneously taking a sun bath at the temperature of +41 degrees. The hot asphalt enhances the already “warm welcome”. 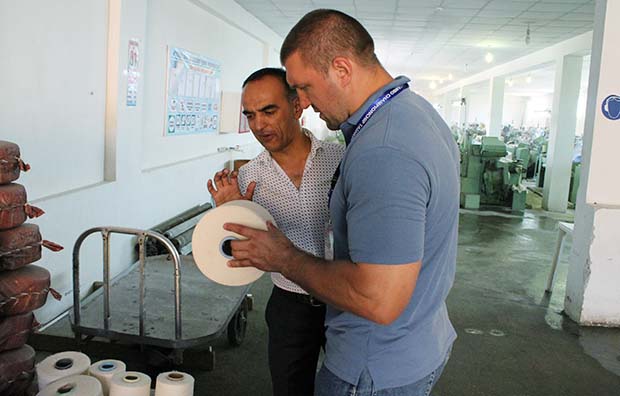 Nabi Hasanov, who has a title of “Manager” on a business card, shows us the whole process of sports uniform manufacturing. The complete production cycle is got going at the factory, the threads of which then a uniform is manufactured are the only thing that the company doesn’t produce on its own, and purchases from suppliers. 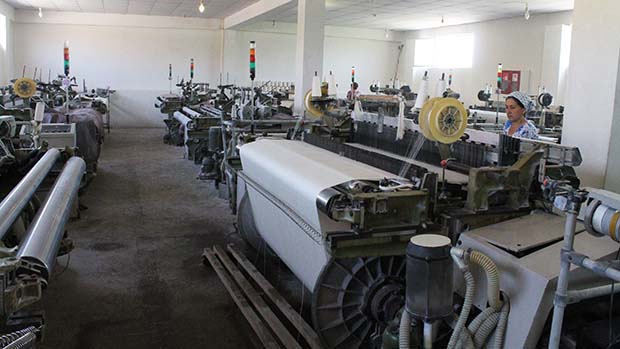 Further, smart appliances, run by professionals, make fabric of the threads. As Nabi Hasanov explains, the factory’s machines can produce not only a solid fabric for SAMBO uniforms, but also very thin – for gauze. All depends on the mode that will run the equipment.

A poster warning of the need to comply with fire safety regulations, hangs at the entrance to the shop. 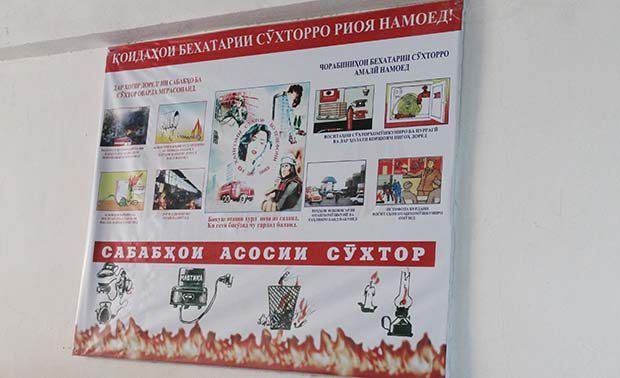 A poster from which you can understand how many people are working in the shop and under whose authority is nearby. 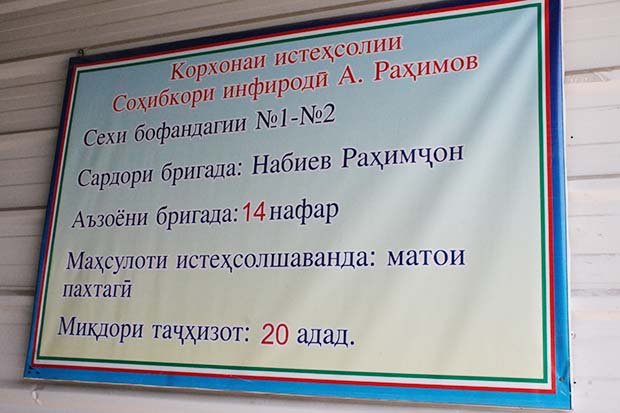 The density of the cloth and quality of the finishing can be seen with the naked eye. 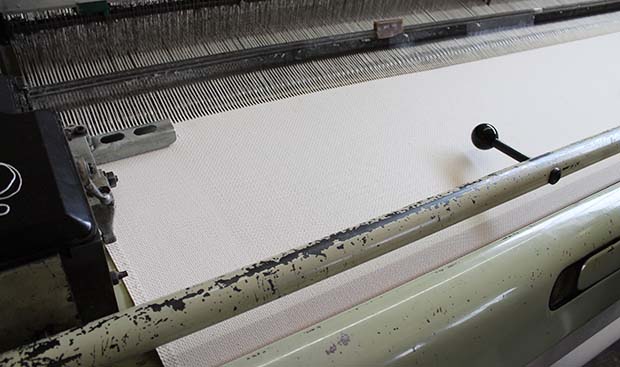 During the commissioning of the next shop, the company was visited by the President of Tajikistan Emomali Rahmon. Documentary evidence of this is at the entrance to one of the shops. 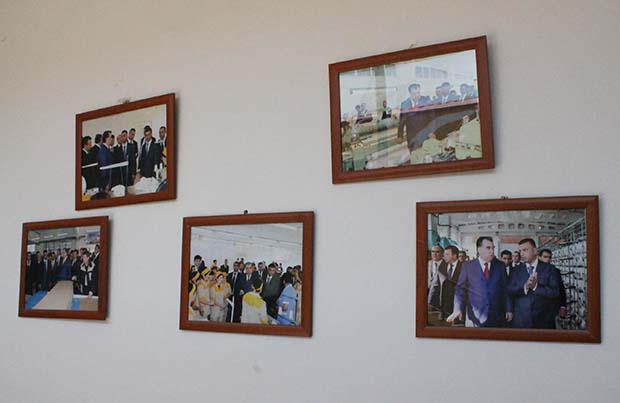 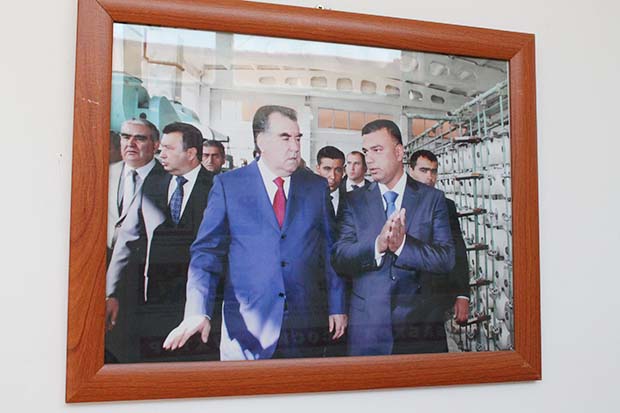 As they told us at this particular factory, the company’s operation began with one shop, eventually opened the second, the third... As a result, now there is almost a complete cycle, necessary for the production of clothing and sportswear here.

After the magic of turning threads into fabric, the finished material is sent for painting. First it is soaked and bleached. It is not visible on the photo, but the drum rotates, making cloth snow-white. Then it is moved for painting. 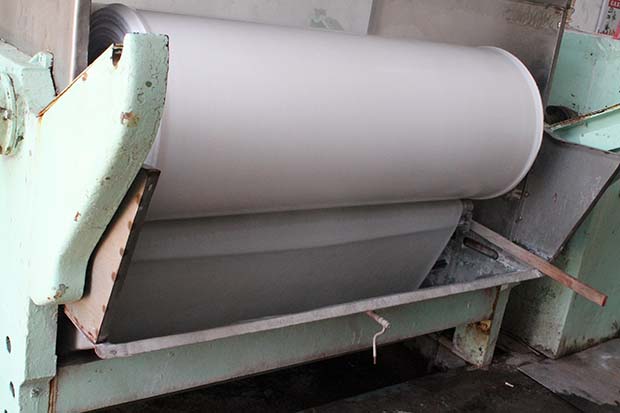 Woven and colored material goes to the sewing shop, where it is tailored, cut and converted into sportswear. 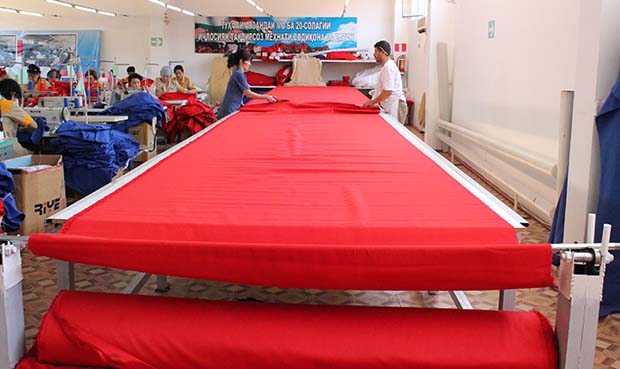 As can be seen, the population of this shop is mainly female. 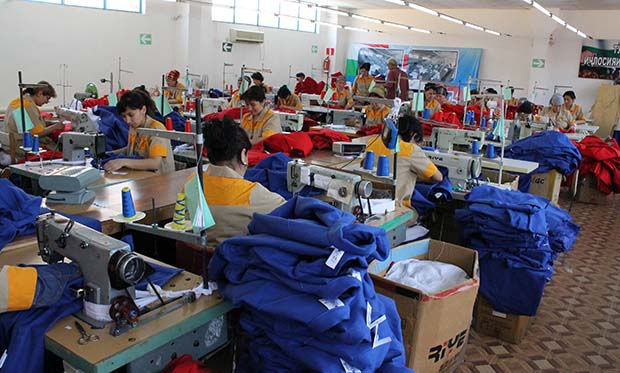 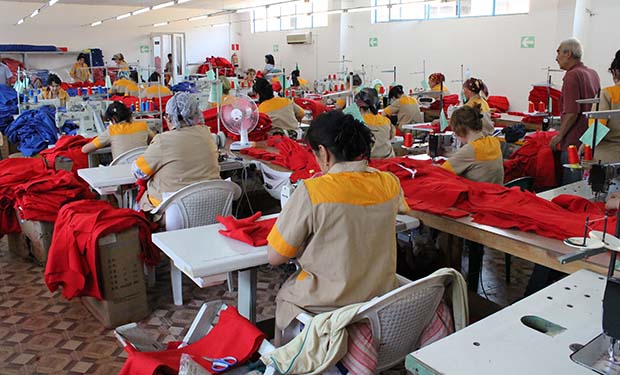 Each employee is doing her part of work. 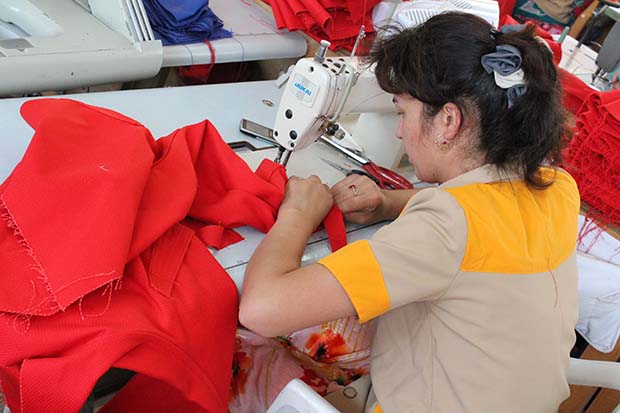 It is perhaps better to work to the music from the headphones. 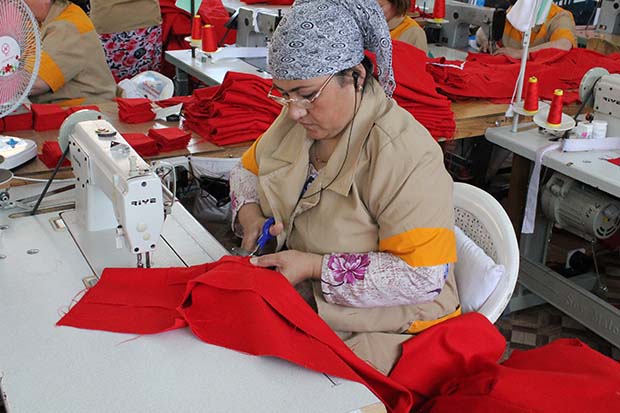 We are noticed! Let’s not distract employees from work. 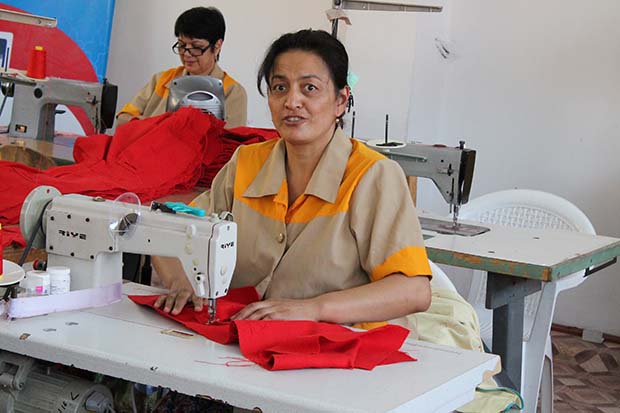 Finished uniform is beautifully folded and packaged. So you want to take and try it on! 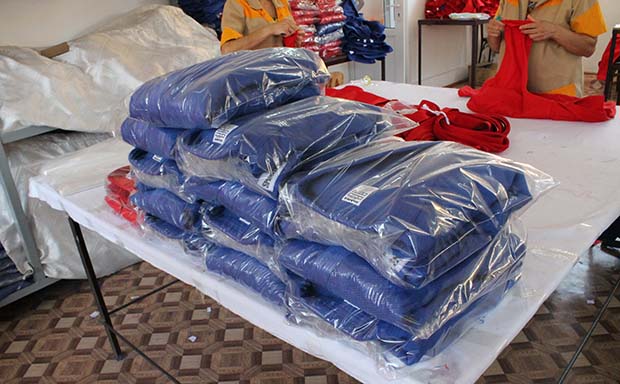 Interestingly, that uniform from Tajikistan is diverged almost worldwide. Recently, Rakhimov A.A. LLC (TM «ESKHATA») entered into the agreement with one of the world’s largest sports goods store Decathlon. It should be noted that choosing of the factory by the customer lasted about a year. After a careful analysis and testing of absolutely all factors – from process equipment to the accounting documentation – Rakhimov A.A. LLC (TM «ESKHATA») was singled out. Now the factory is executing a large order of the famous brand. 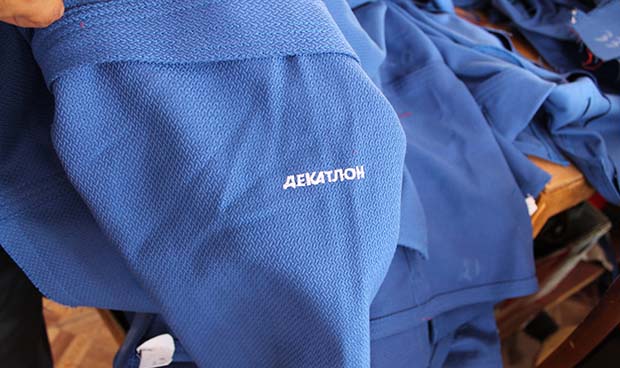 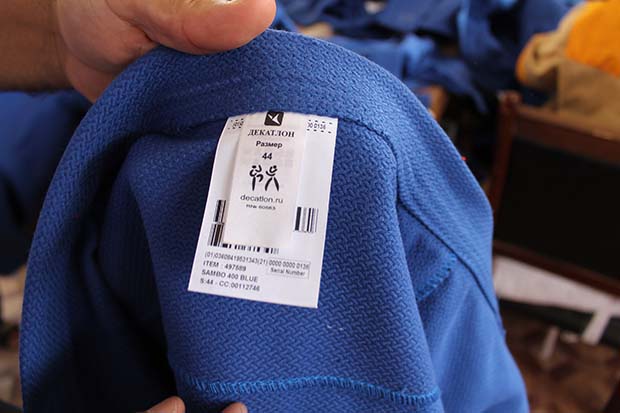 SAMBO athletes need not only clothes, but also shoes. The factory is also able to do them well. A roughly equal number of men and women are engaged in the shoes manufacturing. 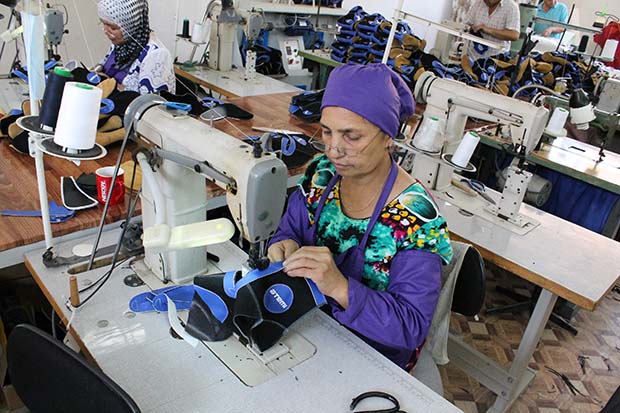 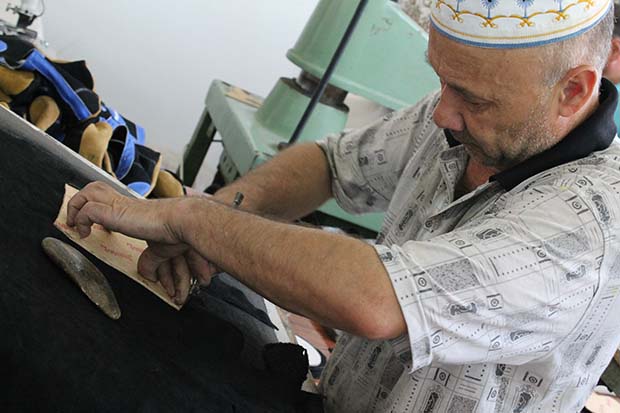 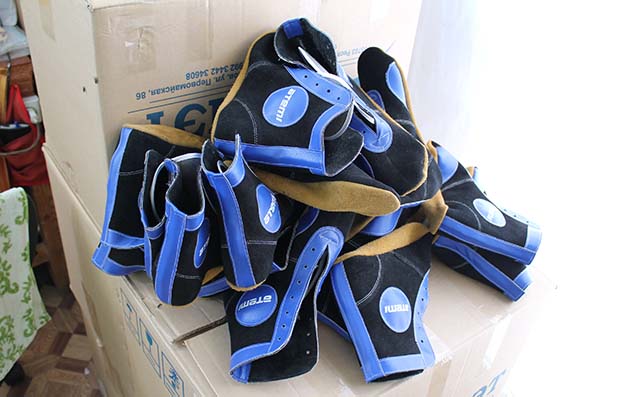 At the factory, they dress up not only SAMBO athletes, but also representatives of other sports. 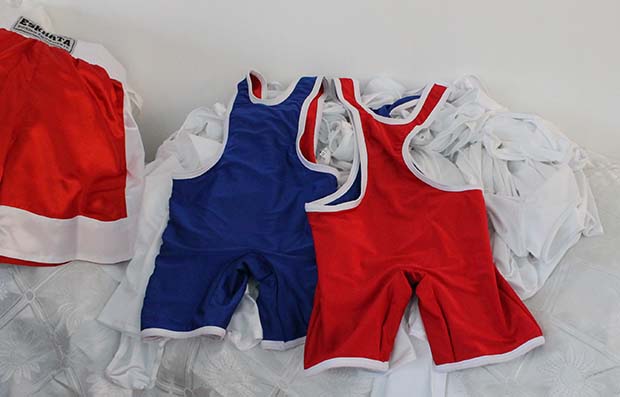 Development of sketches and creation of future models takes place in the offices, where computers are the central characters. 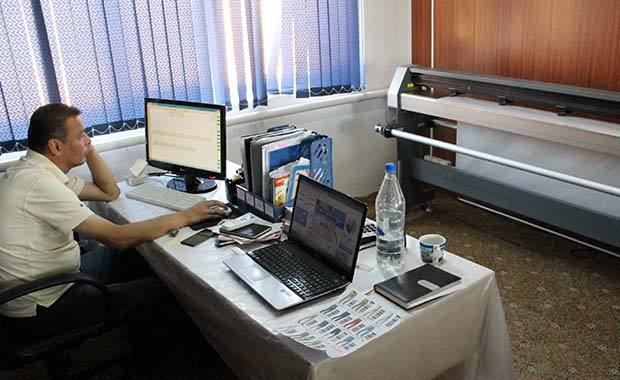 And here threads are wrapped onto huge coils... 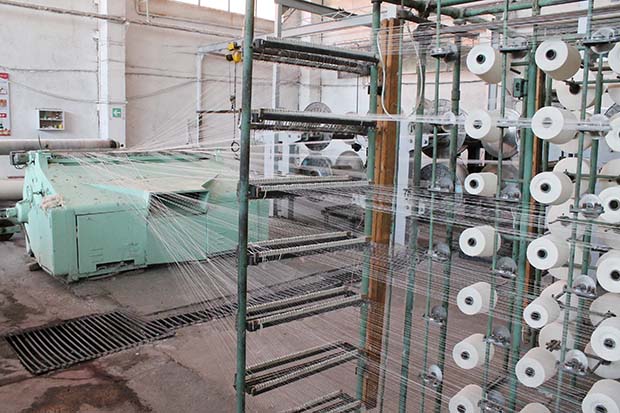 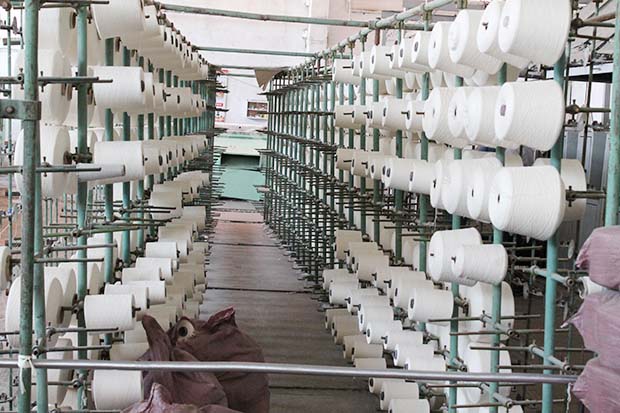 Then they are manually sorted giving the right direction for each thread. And run the cycle for the production of fabrics and uniforms of it. 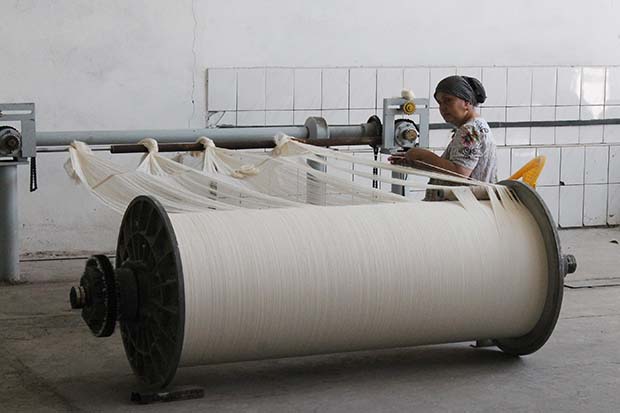 And our tour came to an end. There is nothing to do but make a commemorative picture. 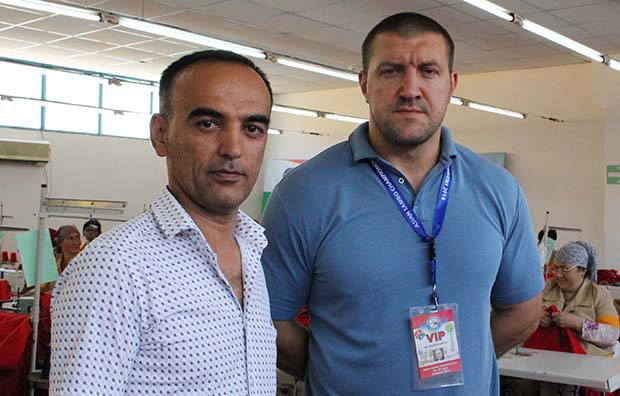