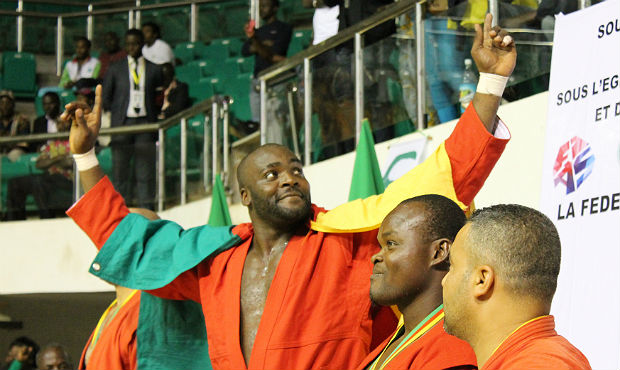 This African Championship will go down in history as the most striking one. It was the first time when the tournament of such level was held in Central Africa giving it the local color. Just before the championship many people were worried – what the tournament would be like, whether the organizers would be too excited and what the newcomers would be capable of. It turned out to be great – the Cameroonians not only managed to hold the event, but also introduced many ideas to the world of sambo concerning the manner of holding the international competitions. Local sportsmen and their great fans managed to achieve the brightest victory memorable for everyone without exception.

Sunday in Yaoundé is the quietest time, when the crowded city is not in a hurry. Most of the stores are closed, taxis are half-empty searching for clients and one can drive along any street without getting in a traffic jam. The city seems lazy and relaxed, so that it was hard for us to tell, whether the audience would like to visit the second day of sambo championship. However, the Cameroonians kept walking to the sport complex in Yaoundé to cheer on their sportsmen. The national team did not win any gold medals on the first day of African Championship; however, local sambo wrestlers decided to prove that they were not going to give up so fast. And in football terms, their fans were acting as the twelfth player in a team. 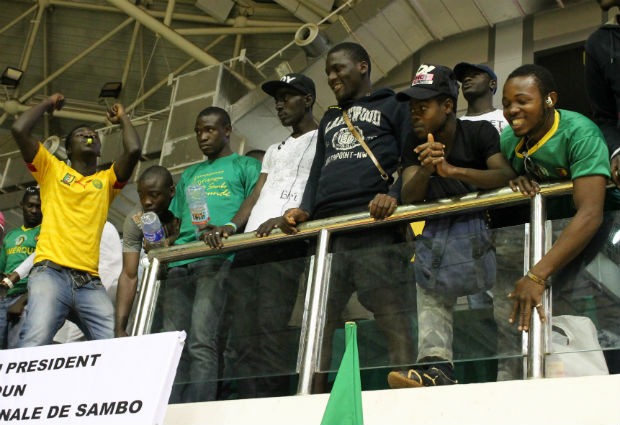 On the first day of African Championship the four men finals took place, where Cameroonian and Moroccan sambo wrestlers were the main competitors. Moroccans, who had more experience in combats of various levels, were the winners in the championship. Women combats were the next to support their national male wrestlers. The evening part of the second day started with women finals and, irrespectively of the determining combat outcome, it was clear that Cameroon had won its first gold medal. Having watched failures of their male team friends the Cameroonian sportswomen resolved the situation at the preliminary stage of the competition by combating their rivals from the other countries. Thus, two Cameroonian sportswomen took part in the first final of the day; Catherine Ngo-Ngwe was the winner. 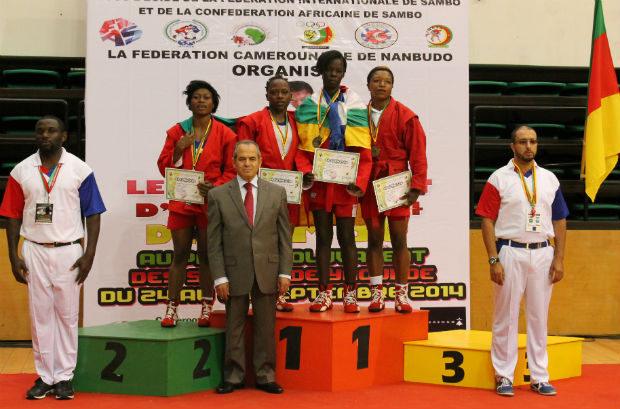 I want to thank everybody, who supported me, the fact that I won confirms that everything happened for a reason, and we would keep working hard. I’ve been taking part in different combat sports for over 10 years, and six months ago I discovered sambo. I got very interested in this kind of sport, this is an ideal mix of wrestling and judo, thus I decided to go into sambo, – says the champion in the category below 60 kg. – Sport helps me a lot and inspires me as well. For women is really hard to do sport in Cameroon, as everybody thinks that a woman should marry, be with her family, cook and bring up children. I chose sport and today’s success proves that I had chosen the right way. 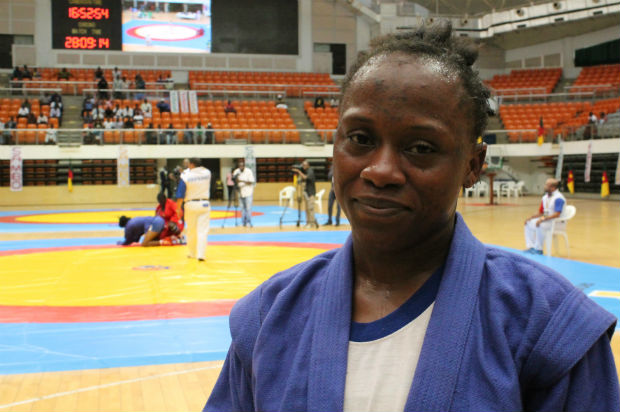 Inspired by the female team success (first gold medal of Catherine was followed by her team fellow Nicole Tonmè), “Indomitable Lions” – Cameroonian sambo wrestlers, started to combat. In finals they had to compete with sportsmen from Morocco, Tunis and Burundi. Decisive and driven by the shouting tribunes, they’ve managed to achieve almost the highest score: 4 out of 5 gold medals of the second day of the competition among men remained in Cameroon. On the first day of the competition Moroccan champions running along the sports hall with the flag of their country, but now it was the host’s turn to roll themselves up in the flag, sing in chorus the Cameroon’s anthem and swing champions, throwing them high in the air. Local reporters, in their turn, didn’t miss their opportunity to record the cheerful emotions and interview winners. 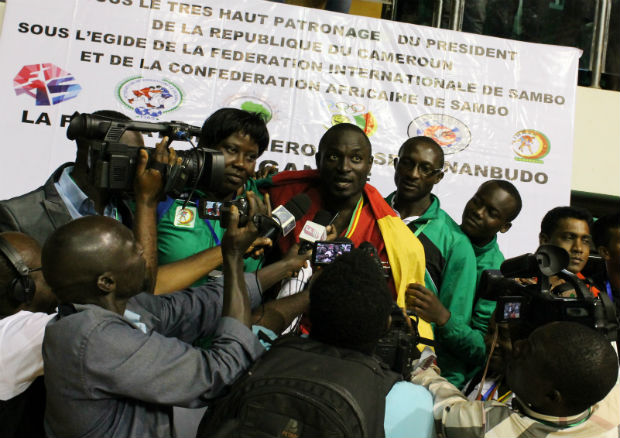 When at the tournament closing ceremony the President of the Nanbudo Federation, Sambo National League François Mbassi started listing the number of medals received by each national team, a lot of people held their breaths. And then he said that the 2nd place was taken by Morocco team, and the hall starts cheering and applauding, as it meant the Cameroon’s team won. 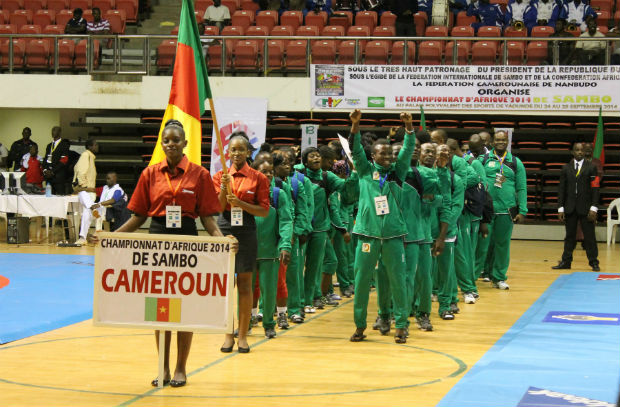 However, Cameroon was a multiple winner. In addition to the sport victory, this country is the winner in organization of African Championship. There was hardly one expert or common observer, who could say this was the first sambo tournament of such level held in the country. The tournament was arranged in a thorough and accurate manner, which allowed visiting a sport festival and enjoying every minute in the sport complex in Yaoundé. Festive opening ceremony and closing ceremony of the African Championship were discussed in the capital of Cameroon on the second day after the competition ending, too. All TV channels, radio and publication media broadcasted and published the tournament results and the success of the country national team. This is a really great festival to go down in the African sambo history. 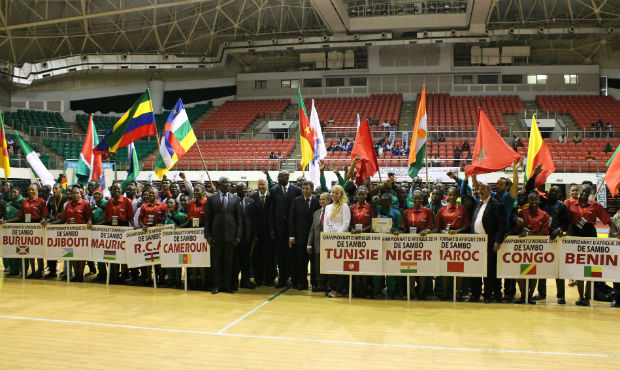 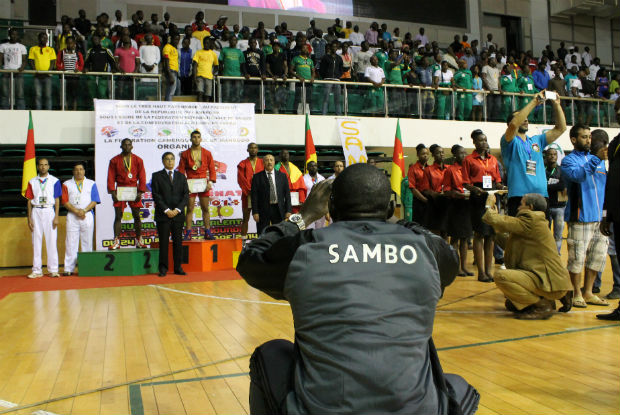