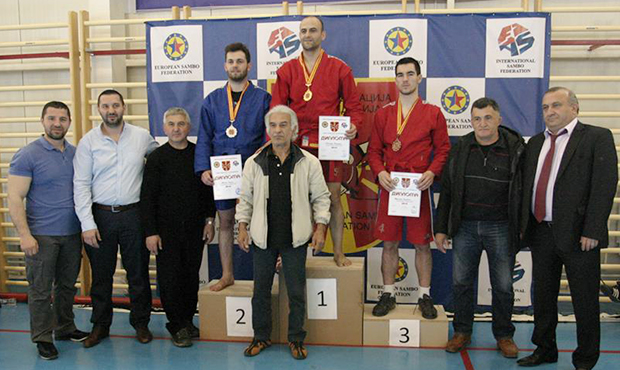 Rapid pace of Sambo development has been recorded in Macedonia. The Sambo Federation was established in this country last year, and it has already been recognised by the local Ministry of Sports. And the first in the history of the country National Sambo Championship among men took place last weekend. The prospects of the recognition of the Macedonian Sambo Federation by the National Olympic Committee were discussed during the Championship. The FIAS website is giving information on the details of how Sambo is progressing on the Balkan Peninsula.

About 40 Macedonian Sambo athletes were in pre-game excitement in the morning, March 30, in Marco Zefidzhus hall in Skopje. Within a few hours they were to find out the names of the winners and prize-winners of the first Macedonian Sambo Championship. Of course, this was not the first time athletes to perform at major tournaments, because each of them had been engaged in some martial arts before. However, responsibility for the Sambo debut was special.

This debut could not take place without the active work of President of the Greek Sambo Federation Merabi Iliadis. For several years he has been negotiating with many sports functionaries, looking for opportunities to start Sambo development in the republic near to Greece. As a result, his active involvement has paid off, and Sambo starts to gain momentum in Macedonia.

This becomes apparent not only in the competitions, but also in educational activities. Referees and coaches were trained on the eve of the tournament. On March 29 a seminar for them was conducted by specialists from Bulgaria, the country which is well-known by Sambo traditions. During the day they taught not only basic things, but also fine points of coaching, refereeing and judging. In addition, they contributed greatly to the organisation of the national championship and helped hold it at the proper level.

Both interest in the competition on the press and television part, and the presence of distinguished guests on it testified to the effect that the level of the tournament was very high. At the invitation of President of the Macedonian Sambo Federation Erdal Fakish, the Championship was attended not only by his colleague from Greece Merabi Iliadis, but President of the National Olympic Committee Vasily Tuporkovsky as well. The officials closely watched the fights on Sambo mats and after that they discussed the prospects of Sambo in Macedonia.

- Today our colleagues from Macedonia are taking their first steps and there are many difficulties in their way. But I am sure that they will be able to overcome them to take their rightful place in the world Sambo family in the future. The most important thing is that the President and all members of the Federation have a great desire and enthusiasm, so they will succeed. And I am sure that the European and International Sambo Federations will support the young organisation, - Merabi Iliadis said.

According to him, President of the Macedonian NOC Vasily Tuporkovsky praised the level of the Sambo Championship, as well as the whole work of the Federation. He also assured that the National Olympic Committee is interested in the development of Sambo in the country and stressed that the Federation has a good chance of getting NOC recognition in the near future. This means that the momentum gained by Macedonian Sambo, continues to grow. Very soon, local athletes are planning to try their hand at the European Championship to be held in Bucharest in May. The FIAS website will tell you how successful it will be.

RESULTS OF THE 2014 MACEDONIAN SAMBO CHAMPIONSHIP