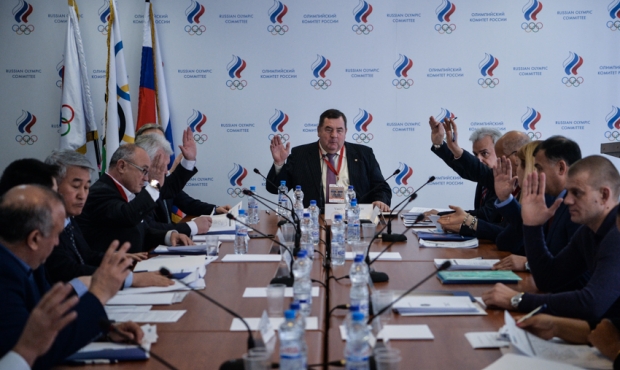 FIAS’s Executive Committee meeting has been held today, March 25, at the Russian Olympic Committee. The event was opened by FIAS’s President Vasily Shestakov who noted the success of the Sambo World Championship-2015 in Morocco. Over 400 athletes from 78 countries have participated in the tournament and medals were distributed among 23 countries.

The President also noted the high level of the continental championships last year and mentioned FIAS’s successes in the implementation of sambo into the program of various multisport events.

The Executive Committee unanimously decided to amend the powers of the President of FIAS in the statute of the International Sambo Federation for submission to the Congress of FIAS, which will be held in Sofia (Bulgaria) during the World Sambo Championship 2016.

The Executive Committee also unanimously adopted a number of important documents for FIAS, which are necessary for the daily life of the sambo community and for entering the world Olympic family. The compliance of all the documents governing the activities of international sports federations to the IOC requirements is an important part of the global recognition of the federation by the Olympic family. Today, the Board adopted the following documents: FIAS’s disciplinary code and an application document for event organizers.

Sergey Eliseev also noted that from this year a sports rating comes into effect, which summarizes the results of the championships, the World Cup and international tournaments. According to its results it will be much easier to draw top wrestlers in order to optimize the competitive process.

The committee also listened to a report by the Chairman of the FIAS’s Women's Commission, the President of the Sambo Federation of Seychelles Monique Athanase. The head of the commission said the following:

"We had a working meeting in the framework of the World Cup in Morocco, as well as a number of skype conferences. For us in our work, it is important to understand and appreciate the involvement of women in the process of sambo, to understand the extent of their presence in the sambo movement. The main objectives of the Commission are equal opportunities for women in sambo at all levels: athlete, referee, coach."

FIAS’s Executive Director Sergey Tabakov tabled ethics rules for FIAS’s referees, documents for the certification of the uniform and carpets, a program for coaches’ training. All these documents were unanimously adopted by the members of the Executive Committee of FIAS. Sergey Tabakov also tabled a proposal for amendments to the program of the world championships:

"Taking into account the spectators’ interest to the team tournament of the "wall on wall" type, we offer to complement our championship with such a team tournament: male and female. Moreover, in order to allow more countries to participate and present their teams we offer to reduce the number of weight classes from 9 to 7 by removing the smallest categories and making the biggest one the 72 kg for women and 90+ kg for men."

[Photogallery] FIAS Executive Board Meeting in Moscow
Tags:
Share
News on the topic
Blog
Recent photos
Latest news
Recent videos
Latest news
Follow latest news You are subscribed!
Thank you! Your confirmation email has been sent to your email.
This website uses cookies to ensure you get the best experience on our website More info Got it!