SAMBO Cup of the Russian President Vladimir Putin in Japan: opinions and thoughts 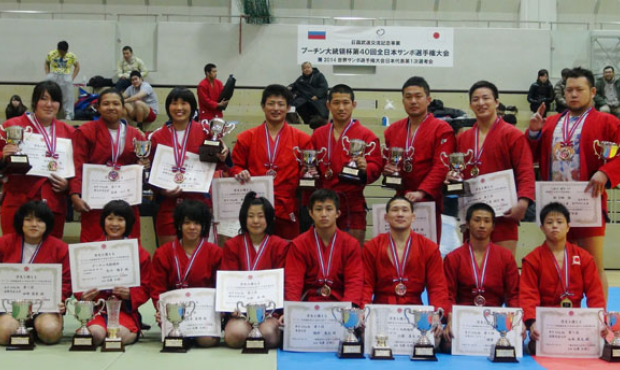 In this report from Tokyo there are a few words about what the Russian Ambassador to Japan thinks about SAMBO, our assumption about why the Japanese are so strong in spirit, as well as the first talks about who may visit the World SAMBO Championship 2014.

SAMBO Cup of the Russian President Vladimir Putin, the 40th All-Japan SAMBO Championship was held in Yokohama yesterday. The Tournament with a sonorous name was held in the Land of the Rising Sun for the second time already. Yevgeny Afanasyev, Russian Ambassador to Japan, visited it for the second time as well. This year the Tournament was held within the framework of the Japan-Russia Martial Arts Exchange Year and with the support of the Japan-Russia Youth Exchange Center. It is worth noting that SAMBO Tournaments, including the World Championship starting in November, fall very naturally into the programme for the year of 2014 which was announced the Japan-Russia Martial Arts Exchange Year.

– We are sure you have already had a good handle in SAMBO, and will be an expert till the November World Championship, won’t you? – We ask Yevgeny Afanasyev, Russian Ambassador to Japan.

– Yes, I have started to understand SAMBO rules, I recognise many Japanese athletes, and it was today when I handed over the prize for the best technique to Kota Eto. So, I remember him from the last year, he was also the best at that time, and then won the “silver” for his country at the Universiade in Kazan. I wish SAMBO to develop and achieve objects in view, – answers the Diplomat.

It is about objectives that the organisers of the Tournament set, that we ask Nobuyuki Asai, Vice-President of the Japanese SAMBO Federation, a member of the FIAS Executive Committee. He answers as follows:

– I think the Tournament was a success; there were a lot of interesting fights – bright, with an abundance of technical actions. I am glad that athletes’ skills, in particular SAMBO skills, have been growing. This could be seen in frequent painful leg locks. It means that SAMBO has been developing in Japan not only at the official level, but also at the practical level – right on SAMBO mats of Japan. Being the Vice-President of the Federation, I can’t help rejoicing.

It’s also worth saying a few words about the conditions of SAMBO Cup of the Russian President Vladimir Putin in Japan. The fact is that the Land of the Rising Sun use no central heating, and in winter public facilities are usually not heated. Thus, we were faced the fact that it was about 8-10 degrees Celsius above zero at the sports gym of Yokohama. It certainly made all the participants of the Tournament – from guests to the athletes – to be fit and “warm up” almost every second to keep warm. Looking at the Japanese SAMBO athletes, it became clear at once that it is familiar and commonplace for them, and they meet such conditions as normal. We, on our part, were surprised and very impressed by resistance, patience and courage of the Japanese – qualities which worth learning from them.

Everybody, of course, wondered about the weather conditions during the World SAMBO Championship upcoming in November. At this time the air warms up to plus 18-20 degrees in Japan and, in general, such problems are unlikely. By the way, we have already heard the first talk about the upcoming forecasts (not weather ones) for the World SAMBO Championship in Narita at the gym of Yokohama that day. The fact is that the Russian President Vladimir Putin announced his possible visit to Japan in October-November of the coming year at his meeting with Prime Minister of Japan Abo the day before. And, of course, many SAMBO fans have already associated his visit with the main start of the year for SAMBO athletes – the World Championship.

In November 2013 the entire SAMBO world made sure once again that the Head of Russia visits SAMBO competitions with great relish. At that time Vladimir Putin watched the Finals of the World Championship in St. Petersburg. It is symbolically, in fact, that the Japanese representative Rui Takahashi fought in one of the duel meets, watched by the President of Russia. At that time she became the second. It seems that the athlete won’t mind to take revenge on the dear land this year, especially if Vladimir Putin, President of Russian Federation, will watch her performance at that moment once again.

However, now all thoughts and actions of the Japanese Federation functionaries are focused on organising a great show for all the spectators of the future World Championship, as well as to prepare ideal conditions for athletes’ performances. It’s enough time and character, as we found out, to do that. Therefore we can expect a tournament of a really high level in November.