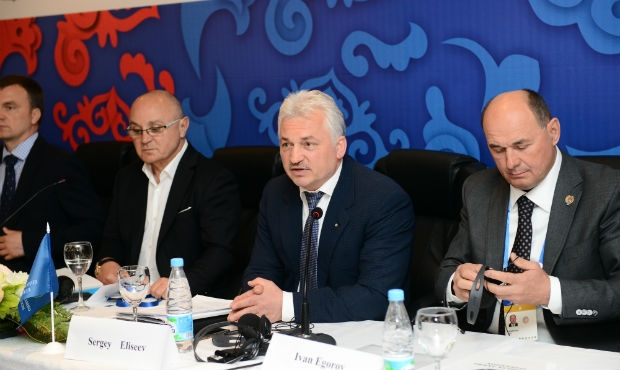 Previous portback election congress of the European Sambo Federation (ESF) was held in 2012 in Moscow. Today in Kazan on the eve of the European Championship-2016 the next portback election congress has taken place bringing together 10 members of the executive committee of the ESF, 29 delegates of the Congress - the representatives of the European Federation of Sambo – ESF’s members, and one delegate - the head of the NSF - an ESF-member candidate. You can read about the most important decisions of the Congress in our report from the capital of Tatarstan.

A report on the work done in the period of 2012-2015 by the President of the European Sambo Federation Sergey Eliseev:

"At the moment the ESF includes 36 national sambo federations. National Sambo Federations of Turkey, Hungary and Macedonia have recently been admitted to the continental federation. One of the most important and strategic issues for the ESF now is the recognition of the national sambo federations by the National Olympic Committees of their respective countries. During these 4 years, we have been actively working in this direction having a number of meetings with the leaders of the Olympic committees of many European countries.

We had a task to increase this number of federations to 30. Unfortunately, this task has not been completed, and at the moment the figure is 18. During the reporting period, the recognition of the National Olympic Committees has been received by the federations of Romania, Macedonia and Cyprus. I want to emphasize once again that this recognition is very important for our advancement into the global Olympic family. Now we have set for ourselves the goal to increase that number to 25. I am sure that if we join our efforts, it will be an achievable goal for us. Perhaps we need to create a special commission to implement this task, which will contribute to a prompt resolution of the matter.

I would like to note that in 2014, sambo took part in the I European Games in Baku (Azerbaijan), which is a huge success and a breakthrough for our sport. Sambo was adequately represented in the program of the Games in Baku. Our participation in European games is an indicator that sambo is not simply trying to, but really is coming to the next level, the Olympic level".

In conclusion, Sergey Eliseev awarded with special diplomas for the great contribution to the development and promotion of sambo the heads of the national sambo federation of Serbia, France, Spain, Croatia and Cyprus.

The delegates adopted as a probation member the Austrian Sambo Federation, headed by Johan Melch.

Election of the members of the executive committee of the ESF

The report by Sergey Eliseev – a presidential candidate of the ESF 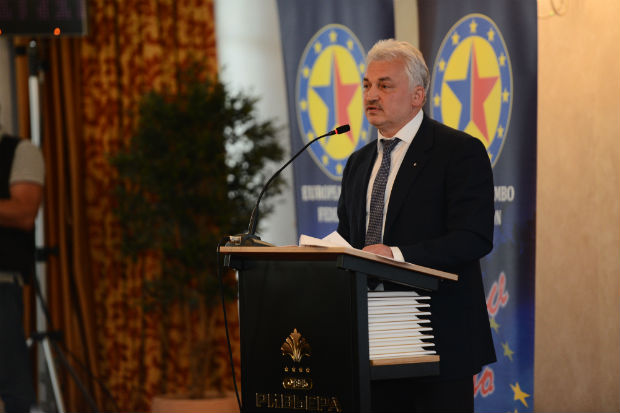 "The main task for us is to increase the number of the National Sambo Federations recognized by the National Olympic Committees of their respective countries. It is a difficult task, but doable. Everything depends on the work of the leaders of the federations whom we and the International Sambo Federation can help. In addition, an important task for us is the need to ensure that each federation is represented in all international competitions in all age categories in the calendars of the FIAS and the ESF in a more complete way.

We also need to strengthen the fiscal discipline, to achieve timely payment of the national sambo federations’ annual membership fees. The primary task is to create the necessary conditions for TV and online broadcasts of all the major events of our calendar, it is an essential condition for the promotion of our sport. I would also like to propose to the International Sambo Federation to celebrate the International Sambo Day. This project would be a good impetus for the promotion of our sport and attracting to it the attention of the press and sponsors".

At the end of his speech Eliseev said:

"This is my brief program; I thank you for your confidence and expect from you any help you can manage, only in cooperation with you we can achieve all these plans".

The unanimous election of the President of the ESF

After the report came the voting time when he was unanimously elected president of the European Sambo Federation for a 4-year term.