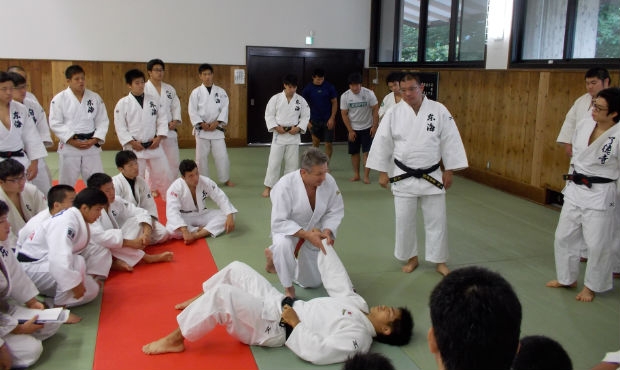 FIAS Executive Director Sergey Tabakov held a Sambo workshop for judokas at Tokai University Judo Club, the top-ranking judo club in Japan. Sergey Tabakov and Nobuyuki Asai, a member of the FIAS Executive Committee, trained Japanese athletes in Sambo techniques that can also be used in judo. A Russian specialist previously taught Sambo techniques to the Japanese during their preparations for the 2013 World Judo Championships in Rio de Janeiro. Using the skills and knowledge they gained,  the Japanese national team won first place in the overall medal standings.

This time, the focus was mainly on mastering various painful arm locks. Tabakov also demonstrated the effectiveness of a variation of the shoulder throw that Sambo wrestlers in practice call a "helicopter." This technique is most often used in Sambo in response to an opponent's attempt to perform a side clinch.

"Many judo techniques and practices were banned due to some changes in the rules. Even Kata Guruma (Shoulder Wheel), a favorite technique of the great judo master  Sensei Jigoro Kano,  came under the ban," Tabakov says. "After studying  judo in Japan, the future founder of Sambo, Vasily Oshchepkov, returned to the USSR to promote it in the country. At that time the country was very closed, so the sport had to be modified by taking the very best from it and adding techniques from a variety of other forms of combat. Thus Sambo was born, and quickly became popular in the Soviet Union. As a result, the national judo team of the USSR was made up entirely of Sambo wrestlers at its debut at the Olympic Games in Tokyo in 1964."

Tabakov added that Sambo has many interesting and effective techniques that can be used in judo even today without breaking the modern rules.

"However,  judokas have forgotten many of these techniques.  The International Judo Federation (IJF) prohibits judokas from participating in competitions in other martial arts. However, no one prohibits training in Sambo locks. In addition, the International Sambo Federation is always open for dialog and is ready to share all of its experience.  The interaction of Sambo and judo at the workshop in Japan is a clear indication of the partnership between the IJF and FIAS under a cooperation agreement signed between the two international federations, " Tabakov said.

It should be noted that the University of Tokai, where the workshop was held, can be called the birthplace of Sambo in Japan. The first President of the Japan Sambo Federation, Shigeyoshi Matsumae, is the founder of this institution.  Head of Tokai University judo club Nobuyuki Sato was the winner of the first ever Open European Championship in 1972. The winner of the World Judo Championship in 1981, Katsuhiko Kashiwazaki, learned  Sambo at the judo club when he was a student. He also won a silver medal at the Open European Sambo Championship in Riga and won an international Sambo competition in Baku. Nobuyuki Asai, the current Japanese representative on the FIAS Executive Committee, is also a graduate of this University.